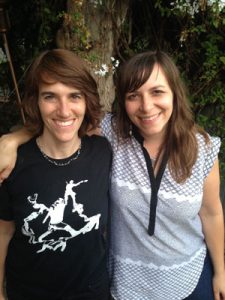 Fine Line Films is the collaboration of documentary filmmakers Jen Gilomen (Producer, Director, Cinematographer) and Sally Rubin (Producer, Director, Editor).  Fine Line Films creates films about human beings who find themselves caught up in some of the most important social issues of our time. The stories are told from the point of view of regular people who aren’t often reflected in mass media.

Fine Line Films completed its first nationally-distributed documentary, Deep Down, in 2010.  Deep Down follows a community in Eastern Kentucky that was facing a mountaintop removal coal mine. The film screened on the award-winning PBS series Independent Lens in 2010, and received an Emmy nomination. In 2014, Fine Line Films produced Life on the Line which follows a year in the life of 11-year-old Kimberly Torrez as she and her family await the visa that will allow them to return to the United States after unforeseen circumstances trap them in the border-town of Nogales, Mexico. Life on the Line screened on PBS as part of Latino Heritage Month (2014) and numerous festivals across the nation, garnering the award for Best Environmental Film at the Mexico International Film Festival (2014) and Best Documentary Honorable Mention at the University Film and Video Association Conference (2014).

Fine Line Films are proudly distributed by New Day Films, and are available for educational use.