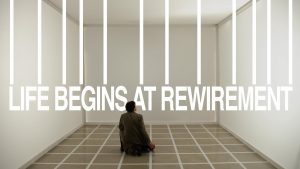 Simon is a middle-aged, successful businessman grappling with the difficult decision of what is best for his ailing parent. After suffering a stroke a few years ago, Jessica is wheelchair bound and can only communicate through a text-to-speech synthesizer. She lives alone and is descending rapidly into dementia.

The strained relationship of a stubborn, forgetful mother and her uptight son is put to the test. Life Begins at Rewirement blurs the lines between memory and oblivion, parent and child, human soul and the spirit of technology.

Directed and Written by Trevin Matcek. Produced by An Tran and Jennifer Westin. Co-Production of ITVS.