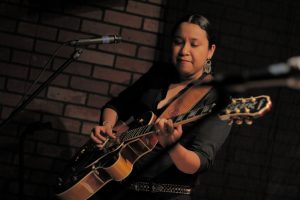 Gloria Estrada began playing the guitar at the age of 14. As a teenager Gloria identified with the sounds of classic rock bands like Janis Joplin, Led Zeppelin, and the Beatles. She was self taught up until her studies at Pasadena City College where she began formal training in both classical and jazz music. In 2004 she was awarded 1st place in the PCC Jazz Competition. She later transferred and received a B.A. in Music at the University of Southern California.