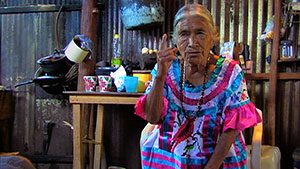 Little Saints is a documentary following six men and women from the United States who, along with Director Oliver Quintanilla, travel to Mexico to meet an extraordinary woman and take part of an ancient ritual of psychological and physical healing.

The ingestion of psilocybe mushrooms in the southern Mexico is an ancient, candlelit ritual. The lack of external stimuli creates a space that is conducive to looking inside oneself. While guided by Mazatec shaman Natalia, the patients examine their issues and find answers within themselves; through prayer and energy cleansings, the shaman purifies their spirits.

Along with their story, the film includes interviews with scientists and researchers who share their knowledge of psychedelic medicines, Mazatec traditions, and current efforts to bring this medicine to the world community. Little Saints was the recipient of National Geographic’s All Roads Film Project Grant Award.

Directed by Oliver Quintanilla. Produced by The Little Children.