A Robot Walks Into a Bar 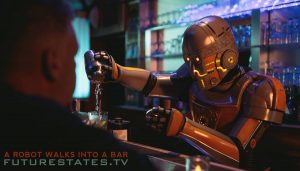 A Robot Walks into a Bar is is a FUTURESTATES film set in the future: Can a new bartending robot help patrons drown their sorrows, all while keeping them from harming themselves? He soon learns his mission may be next to impossible.