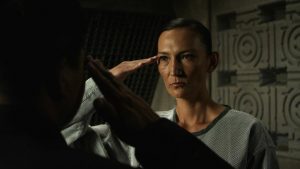 The Sixth World is a FUTURESTATES film set in the future: Navajo Astronaut Tazbah Redhouse is a pilot on the first spaceship sent to colonize Mars. But a mysterious dream the night before her departure indicates there may be more to her mission than she understands.