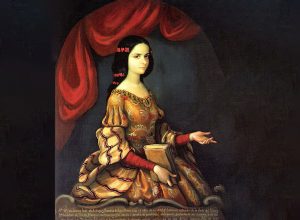 Opera UCLA presented the world premiere of Juana in 2019. The libretto for Juana was co-written by Alicia Gaspar De Alba and Carla Lucero, was composed by Ms. Lucero, and is based on Ms. Gaspar de Alba’s novel “Sor Juana’s Second Dream” (University of New Mexico Press, 1999). Juana portrays the story of Sor Juana Inés de la Cruz (1648-1695), a Mexican nun, who is considered the first great poet in the Americas. Sor Juana Inés de la Cruz was also a composer, playwright, painter, architect, scholar and a contributor to early Spanish literature and the Spanish Golden Age. Juana dramatizes her persecution by the Catholic Church due to her outspoken criticism of patriarchy, her numerous intellectual and artistic pursuits and love for another woman.

Alicia Gaspar de Alba is a scholar, cultural critic, novelist, poet and professor whose works include historical novels and scholarly studies on Chicana/o art, culture and sexuality. Ms. Gaspar de Alba is a Professor of Chicana/o Studies, English, and Women’s Studies at UCLA. At UCLA she was awarded the Shirley Collier Prize for Literature from the Department of English and in 2008, the Gold Shield Faculty Prize for Academic Excellence. She is a prolific writer and has published numerous books and award-winning novels. “Sor Juana’s Second Dream” was named Best Historical Fiction by the Latino Literary Hall of Fame in 2000.

Carla Lucero is a composer and librettist who has received numerous awards, including being featured in the Advocate Magazine, “Best of Stage” in 2001. Her first opera, Wuornos, premiered in 2001 at the Yerba Buena Center for the Arts in San Francisco and was based on Aileen Wuornos’ story, a sex worker and convicted serial killer who was executed in Florida in 2002.