Can’t Be Stopped The Movie 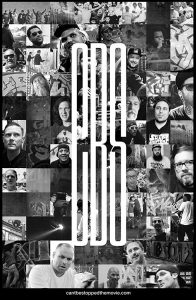 One of the most influential and recognizable graffiti crews to emerge out of the U.S. is Hollywood’s own Can’t Be Stopped crew. Since its inception in the early 1980’s the initials C.B.S. have been at the forefront of evolving graffiti art into a true and viable art form.

The kinship that was forged by the crews’ father figure “Skate” created a bond of brotherhood that is the focal point of this story. C.B.S. was a surrogate family that became the buffer between these young graffiti artists and the temptations of the Hollywood streets. Skate had raised these boys from broken homes to prosperity and left behind a legacy unrivaled. With their ultimate success, endeavors and acclaim were transcending factors in evolving graffiti arts popularity to what it is today.