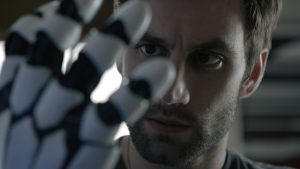 As You Were is a FUTURESTATES film set in the very near future: an injured soldier is fitted with bio-robotic prosthetics to replace limbs lost in combat. Upon returning home, he finds society laced with a deep resentment towards robotics. This young, bionic man — at odds with the very country he protected — struggles to reconnect with himself, his family, and the very idea of what it means to be human.

Starring Trey Holland and Christine Woods. Written and Directed by Trevin Matcek. Produced by An Tran and Jason Baum. Co-Production of ITVS.